RB Sugbo is in Cebu; 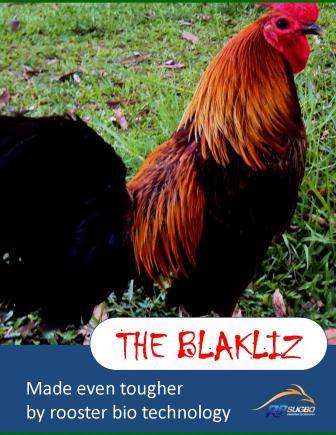 RB Sugbo is the proponent of Rooster Biotech

Rooster Biotech, or game fowl bio technology, is a holistic approach that takes into consideration the development and interrelationships of the soil, plants, microorganism and the chickens that thrive on the system.

There are three bloodlines created by RB Sugbo-- the blakliz, ponkan, and sugbo lemon. They constitute our three-pronged arsenal. (Fowl direct from RB Sugbo Gamefowl Technology are pre-sold to our regular clients. Others interested in our bloodlines may instead contact our mass production farm, Scorpion Ox ... 0947-991-8780)

The blakliz (Sparring of blakliz) started with a cross between a 7-time winner 5-year old Richard Bates black and an equally aging blue face hen. That was in 2001.

The following year I acquired ponkan, the original broodcock that eventually founded our ponkan bloodline. On the sidelines, ponkan was then also bred to one of the black pullets of the brownred x blueface mating. The following year a couple of the black offspring were then bred back to ponkan in a back-to-father line breeding.

Despite being 3/4 of ponkan?s blood, there were still some black stags and pullets among the offspring. There were eight stags in all. Five of the stags were red and only three were brown reds. Since I was after the dark plumage, I gave away the red stags to friends and relatives. I kept the three brown reds and single mated them to their black sisters. I also discarded the red pullets.

Two of the brown red stags I bred were named ?sipsip? and ?butsukoy? (Cebuano word that roughly translates to smart or naughty). Butsukoy was called as such because every time I open the door leading to feed stock room, he immediately  rushed in ahead of me to partake of the feed inside. On the other hand, sipsip made it a routine to fly to my shoulder, as if to please me to gain some favor in return or to make sipsip, every time I emerged from the stock room carrying the pale of feed. As result sipsip always got the first peck at the ration. 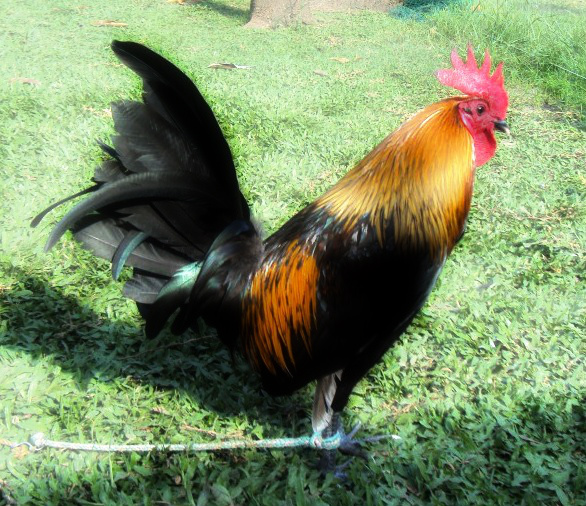 At the end of the breeding season I conditioned and fought the three brown reds and fought them in a 3-cock derby despite their tender age of just 13 months. This was in order to test the mettle of the brothers and in effect the bloodline I am trying to set. Sipsip and butsukoy won handily and quickly. The unnamed one lost after almost 8 minutes despite being crippled in the opening buckles. I was happy with what happened. The two winners proved that the bloodline can kill quickly. The loser showed that there might be some endurance and gameness in them too. As bull stag butsukoy won twice more and lost his fourth fight. While sipsip also won two more fights and got retired as a test brood cock for our organic yards.

In 2004 I fought eight sons of sipsip, butsukoy and the unnamed one as stags. Of the three sons of butsukoy only one won and two lost. A son of the unnamed one won, another lost. All three of sipsip sons won. The total was five wins three loses. Not bad, especially considering that they were in-bred products of brother-sister matings. What was not good was the fact that of the five winners four died due to mortal wounds inflicted during the fights. The other one was too badly blemished that it has to be euthanized. Therefore, not one of the eight sons of the three managed to survive to fight another day. Another alarming thing with the result was the downtrend of the pit performance from the preceding to the current generation. While sipsip and his brothers won a total of six fights against two loses, their in-bred offspring only won five out of eight. Two things were immediately clear: First, Sipsip with all three sons winning their fights was the better producer among the brothers. (The mother was also marked as the better producer among the sisters.); second, that the current generation was no better, or even worse, than the previous generation, so it was not worth keeping. Clearly sipsip and his mate had the better offspring, thus I kept all the black pullets out of sipsip and discarded the pullets out of butsukoy and the unnamed one. I further concluded that the line characteristically absorbed blows because regardless of the fights? outcome, they invariably came out of the pit badly damaged. With Erning and other friends we diagnosed the problem as lack of speed. They packed some power and cut well, but they are not fast enough to follow through on their advantage or to evade the opponents counter blows. Our solution was to infuse a speed bloodline.

Opportunity came in 2005, when Jesse Ledesma won the PAGBA stag derby. His last fight was a black bonanza stag that clinched him the championship in spectacular fastest kill fashion. Through the intercession of my friend and cocking buddy Raul Ebeo, who was at the derby, I managed to acquire said champion stag. This stag was then bred to the pullets out of sipsip. The result was satisfactory so I set them as a bloodline. They were the first  blakliz. This became the foundation and the composition of the blakliz for some generations. Somewhere along the way I infused the Aguirre grey to the blakliz. This accounted for the dirty grey version of the blakliz I called midnight grey. 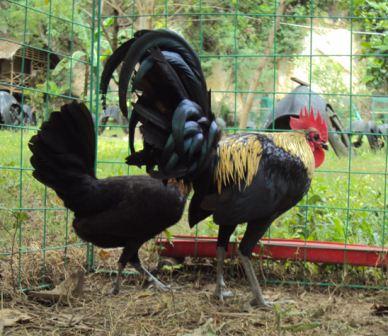 Currently many matings of the blakliz are between midnight grey  and the sipsip blakliz. These matings have produced the better performers in the 2010-2011stag seasons during which we performed creditably in Rambulan 1, Heritage Cup and Bakbakan.

(Sparring midnight grey vs. blakliz plus)

You may get a free copy of this book (PDF). Click

A Guide to Practical Breeding

Ponkan. On photo below is ponkan, the original brood cock from El Dia Game farm of Dr. Ayong Lorenzo. Ponkan was acquired as bull stag in 2001. This photo was taken May 20, 2012 when ponkan was already 12 years old. 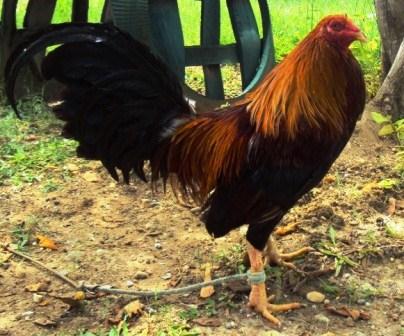 Our ponkans, the bloodline, are out of the sweater, the green legged lemon 84 and Lance de la Torre's roundhead. It is the best seller among the RB Sugbo lines. Ponkan is the name of a broodcock acquired, along with two hens, by RB Sugbo Gamefowl Technology in year 2000 from Pacific Barato. This particular broodcock, sweater in bloodline, was earlier acquired by Pacific Barato from EL Dia Gamefarm of Dr. Ayong Lorenzo. Ponkan is still alive today and active at twelve (12) years of age. From 2000 to 2004, ponkan was bred to different hens. Some were products of line breeding to him. Others were of the lemon guapo, the green legged lemon 84, and lance's roundhead which were all acquired by RB Sugbo GT direct from the originators themselves-- Mayor Juancho Aguirre, Mr. Paeng Araneta and Mr. Lance dela Torre. We called them ponkans because we call the original sweater brood cock from EDL/Excellence of Doc. Ayong Lorenzo by the name ponkan. RB Sugbo GT started by mating ponkan with one of the original hens of the trio. Then by repeatedly breeding back to ponkan producing 3/4s. 7/8s and 15/16s of ponkan. In every generation we try to lock the genes by selective brother-sister mating. We then hoped to proceed with the bro-sister matings to produce sub families of ponkan 3/4s, ponkan 7/8s and ponkan 15/16s which, in the future, could be out-breed to one another. In year 2003, RB Sugbo GT hit a fabulous blend which consisted of 5/8 blood of ponkan, 3/16 of the lemon 84, and 3/16 of Lance's roundhead.Thus, this blend was immediately set into a bloodline which was called "ponkan, the bloodline"in recognition of the dominant contribution of ponkan the broodcock (5/8 or 62.5 percent) to the blend. Two families of ponkan were created. The light red, yellow legged, and peacomb sweater looking ponkan; and the regular red, dark legged, straight combs. The light red, yellow legged, peacomb ponkans are the commercial ponkans. But the other family of dark legged, straight combed provides the better cutting and continuously scores a slightly higher winning percentage than the yellow legged peacomb ponkans. Up to now the pure ponkans are mostly yellow legged and peacombs. But occasionally they throw dark legs or straight combs because the better ponkans invariably come from the intra-family matings of the yellow legged peacombs and the dark legged straight combs--matings that, because of favorable consequence,we have to regularly resort to. is a blend of the sweater, green legged lemon 84 and the roundhead of Lance de la Torre.

Sugbo lemon. (See sparring sugbo lemon vs. blakliz)  Our sugbo lemons came about by mixing the lemon guapo, the batsoy, Lance's and the green legged 84. 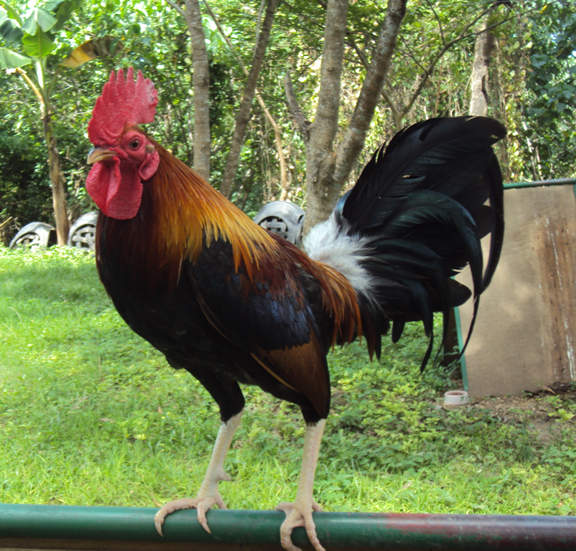 Then we put in a dash of the blue face. They are straight combs. RB Sugbo also maintain its own version of the lemon 84. In 2003-2004 Rey Bajenting of RB Sugbo Gamefowl Technology was researching for an article on the lemons for Pit Games magazine when he himself became fascinated with the different lemon strains. The result was not just a most comprehensive account of the history of the lemons but also his initiation to breeding them. Bajenting interviewed such lemon luminaries as Paeng Araneta, Mayor Juancho Aguirre, Lance dela Torre and Joe Laurenio. From these gentlemen he also got beautiful specimens of the lemon. From these materials came about the sugbo lemons. . 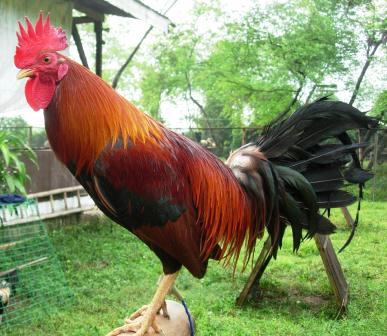